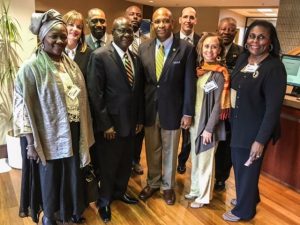 Savannah, Georgia and Monrovia, Liberia have an almost 300 year history. Hence, Liberian Ambassador Jeremiah C. Sulunteh’s February visit to the Savannah Port,  was natural. Savannah’s relationship with Liberia dates back to the 1800s when African-American settlers sailed from its shores to Liberia’s early colonies. That relationship continues today with a Sister Port Agreement that Honorary Consul General Cynthia Blandford arranged. The Agreement, which focuses on training, capacity building, economic development, trade, data sharing, and marketing was signed into action on September 18, 2015 – five months before the ambassador’s visit. 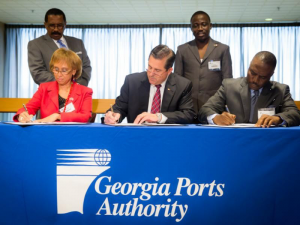 While in Savannah, Ambassador Sulunteh and Honorary Consul General Cynthia Blandford visited Savannah State University – a member institution of the University Consortium for Liberia (UCL). At Savannah State, volunteers organized 1,000 boxes filled with books, school supplies and Pet Carts to assist the disabled in mobility. The boxes were to be shipped to the University of Liberia and AME University. Both the Liberian Consulate Office in Georgia and the Embassy of Liberia in DC support UCL and its mission to provide brighter futures through education and understanding. 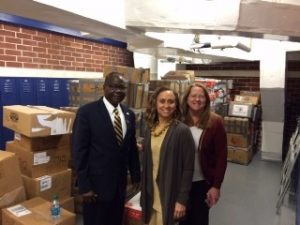