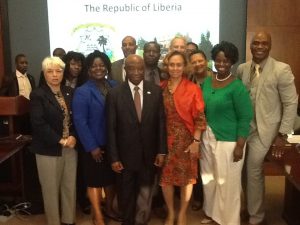 Last October, Liberian Vice President Joseph N. Boakai made a trip to Atlanta organized by the Liberian Consulate office in Georgia. During his visit, the Vice President met and spoke with many organizations to discuss a series of topics concerning Liberia. The Liberian Association of Metro Atlanta (LAMA), Thompson Hine Law firm, the University of Georgia (UGA), Hartsfield-Jackson Atlanta International Airport, Delta Air Lines, The Lofa Association of Georgia (LAG), Centers for Disease Control (CDC), The Carter Center, and Morehouse School of Medicine (MSM) were among the organizations.

Vice President Boakai launched his three day visit with a town hall meeting and dinner hosted by LAMA, LAG, The Patriots for the Transformation of Liberia, and The Friends of Joseph N. Boakai, Sr. During this meeting he discussed topics of dual citizenship, his presidential campaign, the Ebola crisis  and the local community center.  The next morning, Vice President Boakai met with the Thompson Hine Law firm to engage in strategic business discussions. At the breakfast UGA International Programs Director Brian Watkins discussed plans for a program focused on women empowerment and poultry production. Both Watkins and Cynthia Blandford, Liberian Honorary Consul General in Georgia have been collaborating on the project with support from retired Clark Atlanta University president Dr. Kofi Bota and the President of the Ghana International Chamber of Commerce Matilda Arhin.

Travel discussions spilled over into Vice President Boakai’s next meeting with Delta Air Lines where he and the Honorary Consul General discussed reinstating direct flights between Atlanta and Liberia with Peter Carter, Delta’s Executive Vice President and Chief Legal Officer. Day two concluded with The Lofa Association of Georgia discussing the urgent need to complete the Gbarnga – Mandecoma Highway Project, and the Potential Mining of Wologizi Mountain. The Patriots for Transformation Project wrapped up the evening with a fundraising dinner in honor of the Vice President. At the dinner, Duluth City Council Member Marsha Anderson Bomar presented a proclamation from Duluth Mayor Nancy Harris stating that October 18-21, 2015, was Vice President Joseph N. Boakai, Sr., Day in the City of Duluth.

The Vice president could not leave Atlanta without showing appreciation to Clayton County Sheriff Victor Hill and his Security Team for their service. Vice President Boakai’s eventful Atlanta visit left much anticipation for a progressive 2016.  The Liberian Consulate office in Georgia continues to forge and maintain relationships that will benefit both Liberia and Atlanta in the coming years.