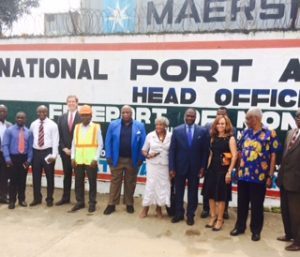 Almost seven years have passed since the first sister-port agreement was signed between The National Port Authority of Liberia and The Georgia Port Authority in Savannah. This past December, a delegation from Georgia traveled along with Honorary Consul General Cynthia Blandford to discuss strengthening the relationship between the two ports.

Mr. Bart Gobell, director of statewide development and governmental affairs at the Georgia Ports Authority was among the delegation from Georgia to sit at the sister port round table discussion.

Please read the following published articles to learn more about the port round table discussion that took place in Liberia.