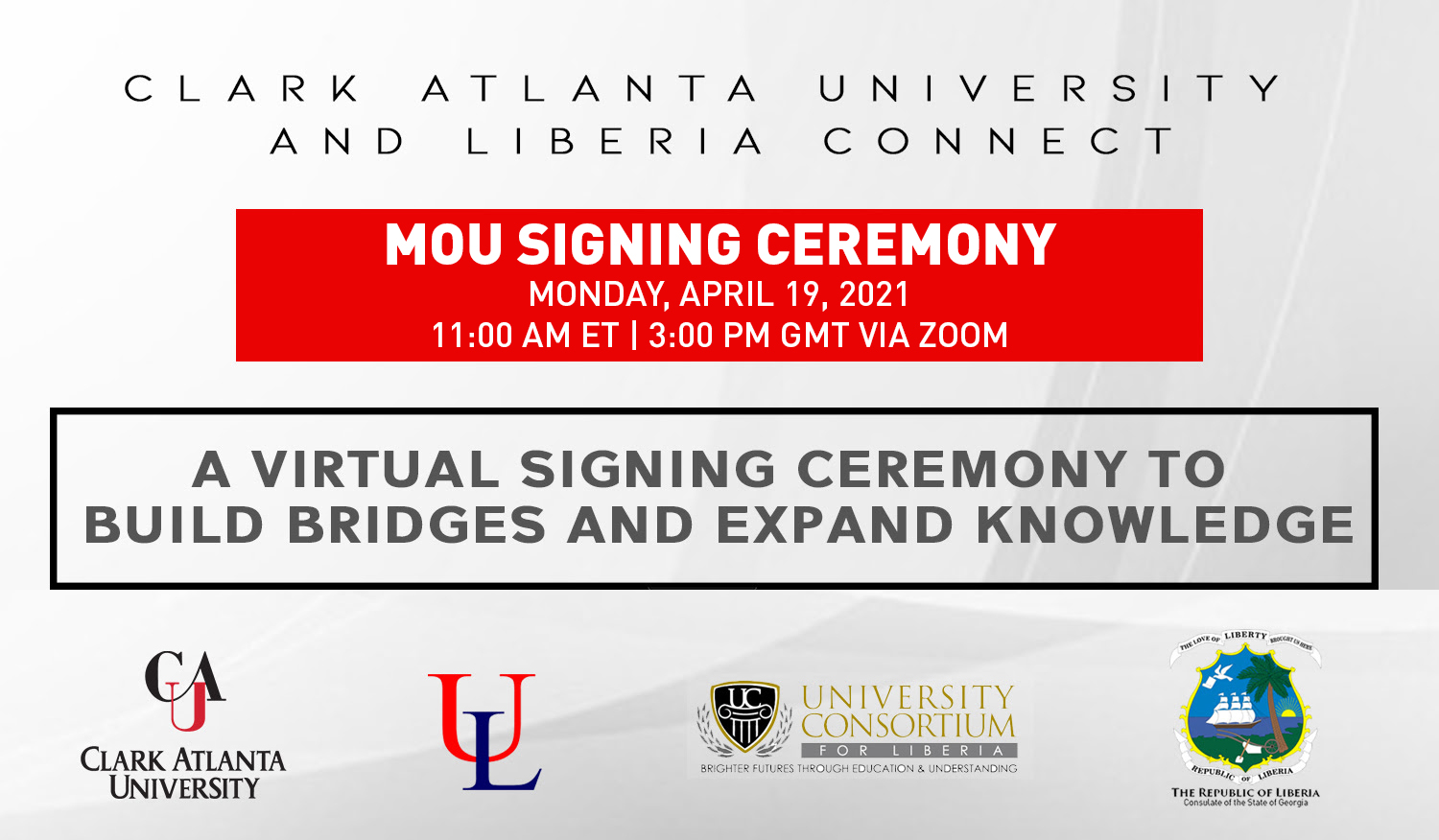 to Establish Partnership of Educational Advancement

ATLANTA (April 13, 2021) — On Monday, April 19th at 11:00 a.m. Clark Atlanta University, the University of Liberia, and the Liberian Consulate in the State of Georgia in a spirit of mutual trust and collaboration, will host a virtual signing ceremony marking the continuation of a unique partnership between both universities.

The partnership will allow both institutions to develop and implement programming and activities to improve their capacities to best serve their students. Clark Atlanta University and the University of Liberia’s missions are similar. They are committed to research, accessing and utilizing emerging technologies, and providing a quality education that produces well-qualified and globally competitive graduates.

“I am ecstatic about the partnership with the Rev. Dr. Julius S. Nelson, Jr., the president of the University of Liberia and his esteemed institution. Such collaborations help to strengthen Clark Atlanta’s outreach on an international level and creates more opportunities for students at both universities,” said President George T. French, Jr., Ph.D.

Additionally, the partnership will include seminars and workshops, the establishment of cultural exchange in areas of education and research, as well as sharing new technologies and methods of management through programming.

“As the President and Board Chair of the University Consortium for Liberia, (UCL) and as Honorary Consul Republic of Liberia in Georgia, we are celebrating a 9-year partnership with Clark Atlanta University and this bold new vision to put a Mandela Young African Leaders Fellowship Program, also known as  (YALI) at University of Liberia, is both exciting and historic. Liberian students will have the opportunity to participate in business and entrepreneurship classroom-based coursework, leadership development, experiential learning, community service, networking and more, modeling what YALI-CAU has successfully done over the years, in Atlanta, Georgia.”

To  learn more about the partnership and to view the signing ceremony live, access Clark Atlanta University’s YouTube Channel or visit liberianconsulatega.com.

About the University of Liberia

About the University Consortium for Liberia

The University Consortium for Liberia (UCL) coordinates diverse academic efforts between Liberia and the global community. Since 2009, we have collaborated with students, university faculty, and other academic professionals to increase learning in Liberia and the United States.

An Atlanta-based 501c3 organization, we coordinate Study Abroad Programs, Service Learning Opportunities, Student and Faculty Exchanges, Research Studies, Workshops & Conferences.  Under UCL, American students have studied abroad in Liberia, participated in service learning opportunities, and prepared research reports. Likewise, Liberian students have received U.S. scholarships in pursuits of Undergraduate, Master’s Degrees and PhDs with the opportunity to apply what they have learned on campus back home in their communities.  Our Honorary Chairs and 19 Institutional Partners give us the opportunity to grant students scholarships and provide educators with additional training. These opportunities have become life changing experiences.  Please visit at www.ucliberia.com for further information. 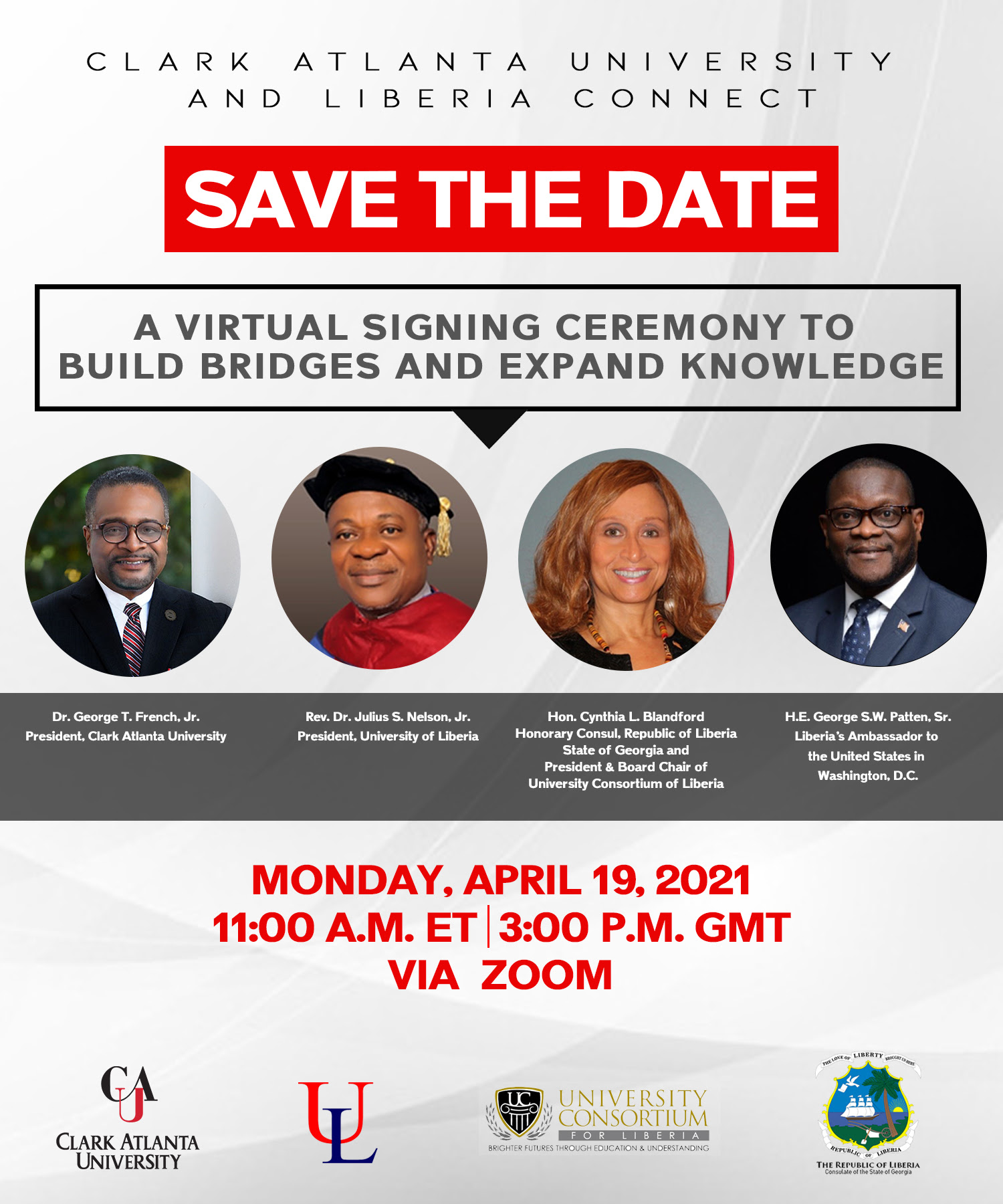