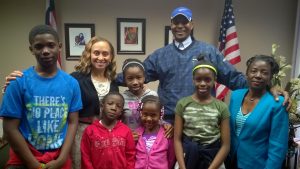 This Spring Break, Liberian pastor Lawrence E Kennedy of Bethel Outreach Ministries in Norcross, Georgia planned a trip to the Liberian Consulate Office with a group of Liberian youths. Spring Break often involves trips to the beach or vacations to places where large bodies of cool water are present, but Pastor Kennedy had a different idea. He organized a small group of Liberian children and a Liberian teacher to take a tour of the Liberian Consulate in Georgia. Cynthia Lynn Blandford, Honorary Consul General led the tour answering questions and delving out interesting facts about Liberia and its leaders.

“What does that key open,” one student asked while pointing to the large golden key sitting in a velvet box in the office corridor.

“It’s the key to the City of Savannah,” Honorary Consul General Cynthia Lynn Blandford answered as she explained how the key is a welcoming symbol that does not open any physical doors.

The key, which offers the Liberian government access to the Mayor and wonderful people of the beautiful city of Savannah, was presented to the Liberian Ambassador and the Honorary Consul on February 26, 2016, during a visit to Savannah, Georgia at the invitation of Senator Lester Jackson.

The Honorary Consul General showcased pictures of Liberia’s leaders and other artifacts in the office. As the group weaved through the space asking questions and receiving answers, they made their way back to the entrance where they posed for several pictures.

The Liberian consulate office is opened Tuesdays and Thursdays by appointment only for visa and consular services.